DXA Test: What You Must Know

The test results you get on your DXA scan can be very confusing. So here’s the scoop on what you must know before your DXA test and the difference between T-scores and Z-scores.

1) When done correctly, bone density tests provide an important piece of information regarding your bone health. [i]

2) Determine whether there is a facility in your area whose personnel, including the technician and the reporting doctor, are trained and certified in densitometry. If your facility does not have certified personnel on staff, ask about the level of training their technicians have received. Visit International Society of Clinical Densitometry to find a practitioner.

4) For a more accurate follow-up comparison, bone testing needs to be done on the same (exact) machine.

5) Some facilities ask you to change into a gown, others do not. Using a gown eliminates the possibility of metal in your clothing interfering with the scan.

6) Correct positioning: For the best results, the feet should be positioned in a device that provides a fifteen-to twenty-degree internal rotation of the hip. (Note the left leg in the image above.)

7) Avoid taking calcium supplements the day before the test, because undissolved pills can add to the bone density measurement if they are lodged in an area of your intestines that overlaps the bones.

8) If you have scoliosis, make sure the technician is made aware as scoliosis will impact the results.

9) A technician should complete the scan. The computer generated results, including the X-ray images, should be given to the reporting doctor, ideally a densitometrist.

10) Get your full four-page colored report. Create a file and save your DXA reports.

The DXA scan measures your bone mineral density (or BMD). When the results are in you’ll probably get a “T-score” from your doctor. This is a number that compares your bone mineral density to the average BMD of people of the same gender as you but 26 to 29 years old. (In other words, for many of us, that means our mature bones are being measured against the bones of a young white woman. Men get measured against the bones of young white men aged 26 to 29 years old.)

If you score a zero, you have bone density that’s similar to a 27-year old.

If your T-score is -1, your bone density is low compared to that average young person. In fact, it means that you’re about 12% below that average. But if you’re 61 or 83, nobody expects you to have the BMD of a young woman. So a T-score of -1 is normal.

Why do they say -1 instead of -12%? For those of you who know statistics, the -1 means one standard deviation below the average you’re being compared to on a bell curve. For me, it’s easier to talk about percentages.

If your BMD is -1.1 to -2.4 that means you are 13.2% to 28.8% below the youthful average. That’s when your doctor will probably say you have low bone mineral density or osteopenia.

It’s not until your T-score comes in at -2.5 or lower that you’ll get a diagnosis of osteoporosis. At that score you are 30% or more below the average young woman.

What if you’re not white? When the World Health Organization came up with the T-score system in 1994 they used white women for the standard mostly because white women are most affected by osteoporosis. African American women on average have about 10% higher bone mineral density than white women. And Asian women have about 7% higher BMD. 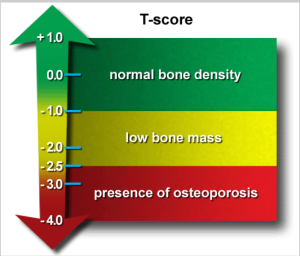 If your Z-score is above -2.0 that’s considered normal. If it’s lower than that, you may not get a diagnosis of osteoporosis but it is a sign for concern.

In general, the T-score is used for men and women over age 50, and all postmenopausal women.

The Z-score is typically used for pre-menopausal women, and also for men under 50. 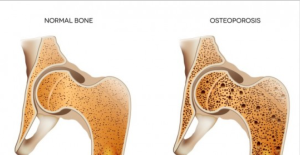 But here’s the thing. The scores don’t always agree. In an Irish study published in the Journal of Densitometry, using Z-scores resulted in significantly fewer people being diagnosed with “osteopenia,” “low bone mass for age,” or “osteoporosis.” In fact, between 30% and 39% of people diagnosed as having osteoporosis using a T-score were reclassified as either normal or having only low bone density when their Z-scores were used. [ii]

That’s why it’s important to make sure your results are read by a certified clinical densitometrist (CCD). It may help you avoid a bad diagnosis. Your DXA results are just one aspect of bone health. There are many other ways of looking at how strong your bones are.