The Hacking of the American Mind: The Science Behind the Corporate Takeover of Our Bodies and Brains

In The Hacking of the American Mind, Robert Lustig, MD teases apart the often-entwined concepts of pleasure and happiness. He is unabashedly political and maintains that the hacking is executed by private interests with governmental support. With this book he intends to prove that profit is the sole motive for actions on the part of certain industries to obfuscate the link between their products and disease. Dr. Lustig is a pediatric endocrinologist, working especially with obese and diabetic children. In his 60s he decided to go to law school and work at a policy level to deal with our toxic food environment.

The difference between pleasure and happiness lies in the different neural pathways of dopamine and serotonin. Pleasure relates to reward while happiness is a state of being, an internal sense of contentment. In the how-you-feel-is-data world of Suppers, this is how they feel different from one another:

America has devolved into an addicted and depressed society because we abdicated happiness for pleasure, driven by a food industry that made pleasure cheap. Lustig’s position is that biochemistry always comes first, that is to say, that biochemistry drives behavior. His description of the neural pathways is actually fairly accessible to motivated lay readers, the best I’ve ever read. He describes three: 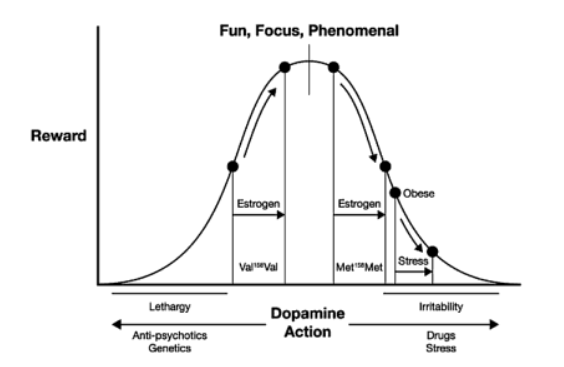 Lustig concludes his book with a charge to – and I swear to you I didn’t know this when I put it on the book report list – cook!